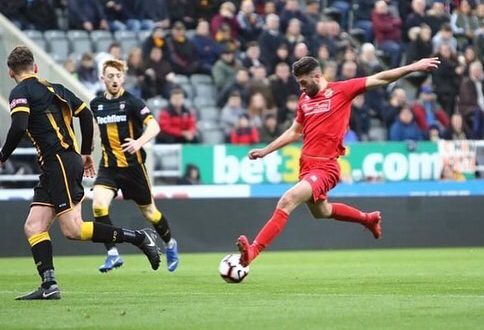 Robins striker Gary Day has unfortunately had to retire from football, following his injury in the 2018/19 Northumberland Senior Cup Final against Morpeth Town.

Following his surgery, Day underwent rehabilitation in pursuit of a return to the pitch. However, after consulting with doctors in recent weeks, the striker was informed that he was no longer able to play competitive football.

The striker, who made 49 appearances for the Robins across two spells, was forced off in the first half of last seasons’ Cup Final after rupturing his ACL.

A member of the 2015 FA Vase winning squad, Gary rejoined the club at the beginning of the 2018/19 season, following a spell with Blyth AFC. Only three minutes into his second debut, Gary scored a sublime goal against Hebburn Town and played a key role in turning around the Robins’ season.

In total, he was able to score 16 goals in his time at the Daren Persson Stadium, with his last goal for the club coming against West Allotment Celtic in the Senior Cup semi-final; helping the Robins to yet another St James’ Park appearance in the process.

Everyone associated with North Shields Football Club, past and present, would like to express their sincere thanks to Gary for his fantastic service over the years.

Whilst we are all distraught that his career has been cut short in such a way, we count ourselves lucky to have been able to call him one of our own.