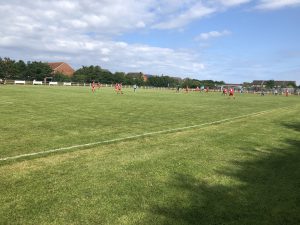 North Shields started their pre-season campaign with a dominating performance against Seaton Delaval.

Marc Nash’s side started the game very strongly with a number of good chances being created going forward for The Robins.

North Shields found themselves a goal down after ten minutes with a strange decision by the linesman not to raise his flag for offside after Heaney placed the ball under the Trialist in goal for North Shields.

This gave Shields a spark to push forward with Delavals goalkeeper being forced into two great saves denying Bainbridge and Carr keeping the hosts in front.

North Shields continued to push forward with Robinson, Cassidy and Jacques giving the forwards something to think about with inviting balls into the box.

Just after the half hour point Shields drew the game level with Gareth Bainbridge on hand to place the ball into the bottom left hand corner.

Five minutes later, new boy Nick Cassidy took the game in favour of North Shields with a fine finish from the centre of the box. Moments later Cameron Cunningham hit the bar with a fine effort from outside the box.

The sides went in at half time with North Shields finishing the strongest side of the contest so far.

Nash and Swinyard made a number of changes at half time to keep minutes in the players legs.

7 minutes into the second half Scott McCarthy stuck at goal with a fine effort looping over the goalkeeper. On the 61st minute Ryan Carr came onto the act to make it 4-1 to The Robins.

In the final 20 minutes Paul Van-Zandvliet joined in on the scoring on his debut for North Shields. A halt in play then occurred with a water break.

Play resumed and Ryan Carr scored his second with a great header to make it 6-1. Scott McCarthy was then found offside with moments later McCarthy picked the ball up again and fired it past the goalkeeper.

The final goal of the game came from Ryan Carr with his hat trick with a stunning effort from the forward.

A great all round performance for North Shields to get their pre season off to a flying start!